The former South African cricketer AB de Villiers has reached UAE for the second leg of the IPL 2021 which is scheduled to start from September 19. We are pretty sure that fans of Royal Challengers Bangalore will be hoping to see him play well in the remaining matches as Virat Kohli led team has a good chance to win the league this time.

Earlier the tournament took place in April in India but it was postponed midway as the country got hit by the second wave of COVID-19 and at that time, RCB was at the third position in the points table with 5 wins in 7 matches.

The arrival of AB de Villiers in UAE was announced on the official Twitter handle of RCB as it tweeted, “Our excitement levels just went @ABdeVilliers17 has joined the team.”

@ABdeVilliers17 has joined the team.

AB de Villiers will have to play an important role if RCB has to win its first IPL title as he and the skipper Virat Kohli form the backbone of RCB batting. 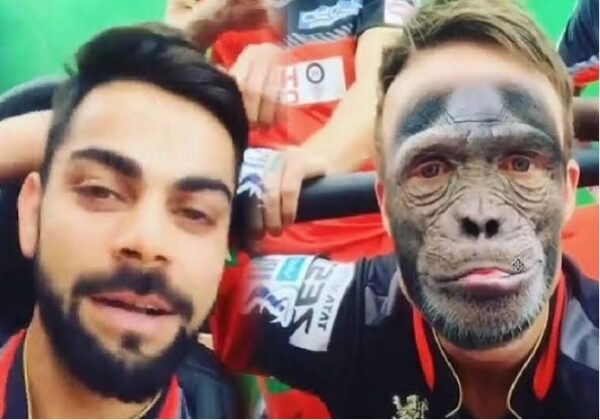 He posted a photo in which he is seen with Virat Kohli but he replaced his own face with the face of an ape and captioned it as, “Really excited about our new signing, Apie de Villiers”.

The photo soon went viral and AB de Villiers also commented, “In memory of all my friends who calls me Ape de Villiers.”

Virat Kohli and AB de Villiers share a great bond and seeing them together is always a treat for the RCB fans who find this photo really cute.

RCB has not won an IPL title till date despite the fact that they have a very strong batting line-up in almost all the seasons. Moreover, Virat Kohli has been associated with the team since the inaugural edition of 2008 and in 2013, he was appointed as the skipper of the team but he failed to take his team home as a winner so far.

The post ‘Apie’ de Villiers’ Hilarious Pic With Virat Kohli Is Going Viral For All The Funny Reasons appeared first on Notesradar.