Lalit Yadav’s poor form with the bat continued against Lucknow Super Giants as he got out for only 3 runs. Ravi Bishnoi bowled him with a Googly.

Delhi Capitals are in a spot of bother at 86 for 4.

Delhi Capitals had a terrible start with the bat as both their openers got out inside the first three overs for just 13 runs in a large chase of 196 runs. David Warner’s catch was sent upstairs but it was deemed out by the third umpire.

Rishabh Pant and Mitchell Marsh then combined together to stitch together a quickfire 50+ partnership but K Gowtham accounted for Marsh’s wicket. Mitchell Marsh did not nick the ball but yet was given out. He did not review the decision as he thought he had nicked it. The DC seemed dejected that Marsh did not review the decision as DC lost his wicket at a crucial stage in the game. Therefore, Delhi after getting a good revival from Pant and Marsh was once again put on the back foot.

There were expectations from Lalit Yadav that would support Rishabh Pant but he couldn’t do so. Ravi Bishnoi bowled his usual googly which Lalit Yadav could not read at all and played all over the ball. 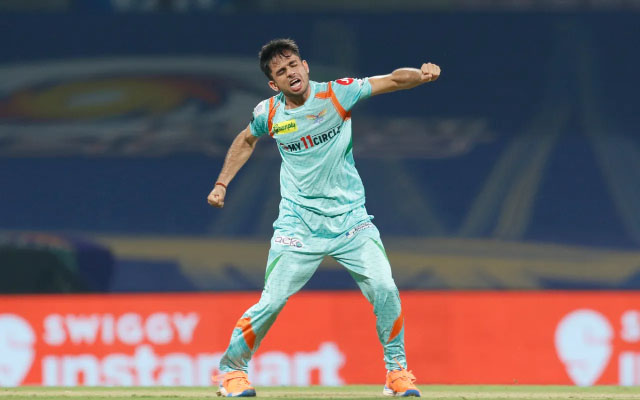 His dismissal left DC 4 down with still more than 100 runs required.

Earlier in the day, KL Rahul played yet another great innings as he scored 77 off 51 balls. He was well supported by Deepak Hooda who scored 52 runs. Shardul Thakur picked up 3 wickets for DC but he was expensive as he gave away 40 runs in his 4 overs.

Lucknow Super Giants have been playing well this season as they already won 6 games, out of the 9 they have played while DC have been hit and a miss 4 wins and 4 losses from 8 games.

Also Read: IPL 2022: It Was Such A Close Game, Couple Of Chances Didn’t Go Our Way – Sanjay Bangar Rues Minor Moments That Went Against RCB

KKR vs RR Live Streaming Details- When And Where To Watch Kolkata Knight Riders vs Rajasthan Royals Live In Your Country? IPL 2022 Match 47