On the other hand, Shardul Thakur, Khaleel Ahmed, Kamlesh Nagarkoti, Tim Seifert, Rovman Powell and Kuldeep Yadav made their debut for Delhi Capitals in the 15th edition of the tournament.

While batting first Mumbai Indians (MI) were off to a flying start as both Rohit Sharma and Ishan Kishan fired with the bat. The Mumbai Indians opening duo batted brilliantly and at the end of the powerplay, Mumbai Indians were at 53/0.

Young Tilak Varma looked brilliant in his debut game and he scored 22 runs off 15 balls, including 3 fours before losing his wicket in the 15th over, which was bowled by Khaleel Ahmed. Kuldeep Yadav dismissed Kieron Pollard on the 5th ball of the 16th over and Pollard was able to contribute only 3 runs off 6 balls for Mumbai Indians. 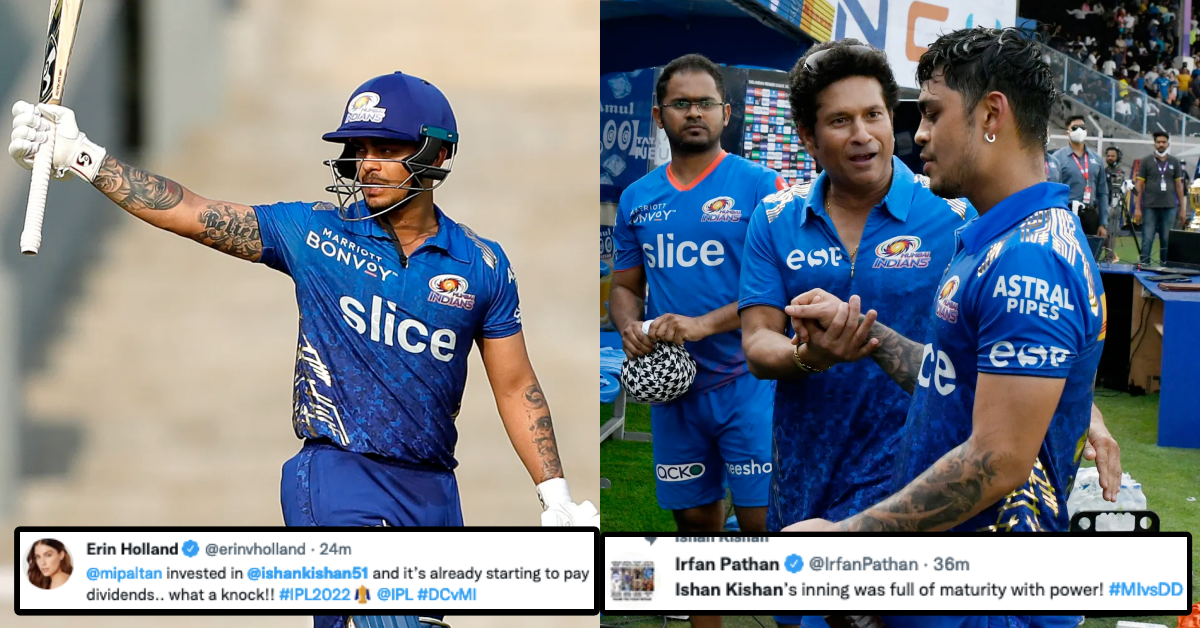 Then, Tim David also got out after smashing one six but opener Ishan Kishan batted sensationally and helped Mumbai Indians score 177 runs. Overall, Ishan Kishan scored 81 runs off 48 balls, including 11 fours and 2 sixes.

While chasing the target, Delhi Capitals openers Prithvi Shaw and Tim Seifert were off to a good start but Mumbai Indians leg-spinner Murugan Ashwin came to bowl the 4th over of the match and he bagged the wickets of Seifert and Mandeep Singh by giving away just one run in the over.

Also, Tymal Mills dismissed Rishabh Pant on the first ball of the 5th over and at the end of the powerplay, Delhi Capitals were at 46/3. In the 10th over of the match, Basil Thampi cleaned up Prithvi Shaw and Rovman Powell. Thampi picked up his 3rd wicket by dismissing Shardul Thakur, who played an amazing 22-run cameo knock.

In the end, Lalit Yadav scored amazing 48 runs and Axar Patel smashed 38 runs to snatch the win away from the Rohit Sharma-led side.

Only using two overseas players, @DelhiCapitals knock off the @mipaltan Lalit and Patel partnership brilliant. Patel capitalising on the dropped catch by David in the 17th over was the game changer. #DCvMI

New heroes will drive the show. The Indians in the Indian Premier League will be the lead narrative this season… What a stunning turn around by the @DelhiCapitals .. #DCvMI

Winning the game From 10 overs 5 down, was a top effort from Delhi capitals. @akshar2026 was outstanding and so was @LalitYadav03 #MIvDC

What a game @mipaltan vs @DelhiCapitals Superb batting by @ishankishan51 .. but @akshar2026 @LalitYadav03 partnership was the difference .. Great win for Delhi .. @imShard changed the momentum in the middle overs .. Good flexible thinking Ricky 💥

Would really like to know why Daniel Sams was given this over ahead of Jasprit Bumrah.#DCvsMI #IPL2022

Masterclass from Rohit to use Bumrah’s last over inside 20 overs. #IPL

Fantastic win for Delhi Capitals. Mumbai Indians had the match under control but kudos to Lalit Yadav & Axar Patel to get DC over the line. Dropped catch of Axar proved very costly. MI have lost the IPL opening game for the 10th successive time!

Mumbai Indians losing the first match of the season pic.twitter.com/W0tUbWaR16

Elated for Lalit Yadav! What a sensational knock #IPL2022 #DCvMI

MI’s opening game juju is incredible to beat. This match was dead and buried.

IPL has sparked to life. Mumbai Indian stuck to their tradition of losing the first match #DCvsMI

Absolute heist this from Lalit Yadav and Axar Patel. MI bottled it with Thampi and Sams just falling apart, but the Delhi lads hung in so well – to go from a required rate of just under 12, to winning with 10 balls to spare is pretty ridiculous

DC vs MI: Good Score On The Board, But Didn’t Bowl According To The Plans – Rohit Sharma After Loss To DC

DC vs MI: Ishan Kishan Taken To Hospital For Scans After Being Hit By Shardul Thakur’s Yorker