Brad Hogg believes England all-rounder Ollie Robinson has been treated harshly by the England and Wales Cricket Board (ECB). The former Australian left-arm wrist spinner believes Robinson should be allowed to play the next Test as he has apologized for his racist tweets.

Ollie Robinson had a brilliant debut for England, that too at Lord’s, in the first England v New Zealand Test. However, things quickly turned sour for the 27-year-old as there was uproar on social media as his racist tweets from 2012-13 resurfaced. 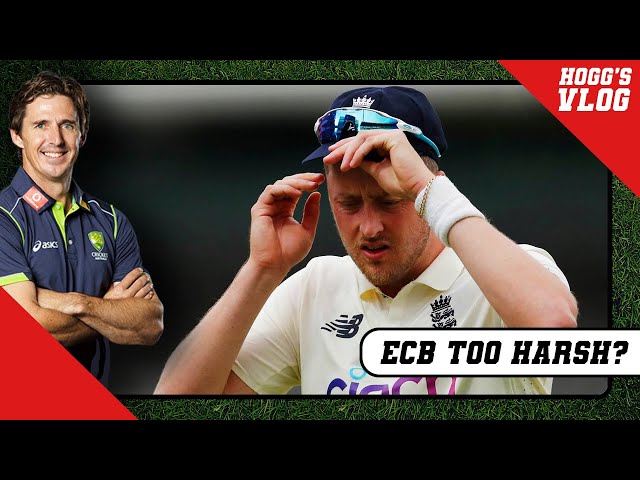 The ECB had to make a strong decision to show that there is no room for racism. They decided to suspend Ollie Robinson from international cricket until the findings of the investigation were announced.

However, in a video on his YouTube channel, Brad Hogg explained why he felt the ECB were too harsh in their treatment of Ollie Robinson.

“For me, the ECB should get off Ollie Robinson’s back. They should be supporting him right now and allowing him to play the next Test match. It is taking a step backwards on his development. This will create insecurity within him right now, because he is going to be unsure moving forward. I don’t believe in racism, but we also have to celebrate people turning their life around,” Brad Hogg opined.

Ollie Robinson’s controversey likely to open a can of worms

After Ollie Robinson’s alleged racist tweets, the ECB has started an investigation against some old tweets by other England players like Eoin Morgan and Jos Buttler. This has certainly made quite a few headlines on how the ECB are going to handle the situation involving such high-profile players.

After Cricket Australia suspended its superstars for being involved in the Sandpapergate scandal, it will be interesting to see whether the ECB make such bold decisions if some of their top players are found guilty of racism.

How much are you enjoying IPL 2021’s cricket coverage? Please spend 30 seconds answering this survey so that we can better understand how to serve your cricket needs