Gujarat Titans defeated Royal Challengers Bangalore by 6 wickets in the Indian Premier League 2022 to win their 8th game of the tournament.

Mohammed Shami opened the attack for Gujarat Titans against Royal Challengers Bangalore openers Faf du Plessis and Virat Kohli and he conceded 10 runs in the over.

In the next over left-arm pacer, Pradeep Sangwan dismissed Royal Challengers Bangalore’s captain for a 4-ball duck.

The third over by Shami was an 8-run over, the 4th over by Sangwan was a 2-run over and Alzarri Joseph bowled the 5th over and conceded 13 runs.

Pacer Sangwan bowled the last over of the powerplay and he gave away 9 runs and at the end of the powerplay, Royal Challengers Bangalore were at 43/1 with Virat Kohli at 27 and Rajat Patidar at 14. In the next 4 overs, Kohli and Patidar scored 5,3,9 and 15 runs and after 10 overs RCB were at 75/1. 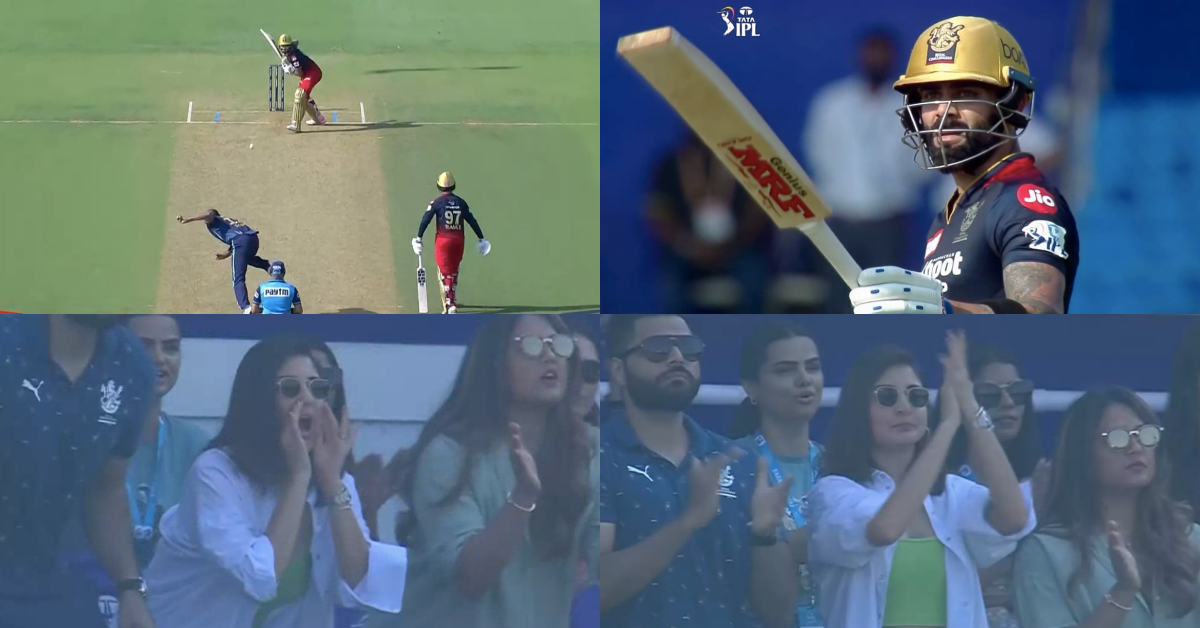 Virat Kohli finally smashed a half-century in Indian Premier League 2022 and he completed his half-century off 45 balls, including 6 fours and one six. This was Kohli’s first fifty in 15 IPL innings. Kohli also had an incredible 99 runs partnership off 74 balls with Rajat Patidar before Patidar got out in the 15th over. Patidar scored brilliant 52 runs off 32 balls, including 5 fours and 2 sixes.

Veteran pacer Mohammed Shami castled Virat Kohli on the 4th ball of the 17th over and Kohli’s innings ended at 58 runs off 53 balls. In the end, after good innings of Glenn Maxwell and Mahipal Lomror Royal Challengers Bangalore were able to post 170/6 on the board.

Chasing the target, GT openers Wriddhiman Saha and Shubman Gill had a good 51 runs partnership off 45 balls before the former was dismissed by Wanindu Hasaranga.

In the end, David Miller smashed sensational 39 runs and Rahul Tewatia smashed exceptional 43 runs to take Gujarat Titans past the finish line once again in the 15th edition of the Indian Premier League 2022.

Here’s How Twitter Reacted To IPL 2022 Match between GT and RCB:

Gujarat Titans. What a team.

They just do not accept that a match is lost.

And then find a way to win it.

Been incredible to watch. #GTvRCB

Tewatia, absolutely brilliant. What stands apart for him is his judgement and pre meditation while finishing. After he hit Hazlewood for a six over fine leg, he anticipated the next ball to be fuller and outside off as a matter of compensation by the bowler, and he was upto it.

It’s fun to tease rcb fans 🥺 but they are very positive people 🥺 pic.twitter.com/8KEd8vb5IM

Tewatia has to be a part of the Indian finishing crew. He’s done it way too many times. @gujarat_titans with another clinical performance. #GTvsRCB

I don’t understand why RCB chose to bat first despite winning the toss? If anything, it’s established that GT gives amazing finishes. 🤔 Looks like the only real way to defeat GT is by letting them bat first.

Third win for this jodi🔥🔥