Prithvi Shaw extended his purple patch to India’s limited-overs tour of Sri Lanka with a sublime fifty in the second intra-squad match.

In a highlights reel released by Sri Lanka Cricket (SLC) on Sunday, the 21-year-old can be seen hitting the likes of Bhuvneswar Kumar, Yuzvendra Chahal, Kuldeep Yadav and Hardik Pandya, among others, with conviction. His shots ranked from a stunning cut against Bhuvneshwar to a step-out loft against one of the spinners.

Although the scores haven’t been released, Prithvi Shaw raises his bat near the end of the clip, most likely to acknowledge his teammates’ adulation for his half-century.

You can watch the full video here: 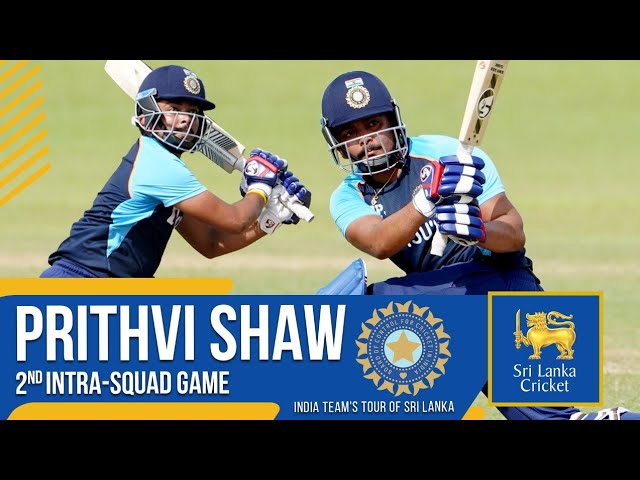 Prithvi Shaw’s innings not only included attacking strokes but also a good number of quick singles, exemplifying his fitness ahead of the series. The knock comes on the back of his 60-run opening stand with Devdutt Padikkal in the previous intra-squad match, the exact scores of which weren’t released either.

If it wasn’t certain before, Prithvi Shaw’s back-to-back performances in the intra-squad matches have all but fixed his spot at the top of the order for the first ODI.

The youngster has had a dream past 6-months in terms of his cricketing form. He was the highest scorer in Mumbai’s victorious Vijay Hazare Trophy campaign and followed it up with his best-ever IPL season so far – 308 runs from eight innings at a strike rate of 166.49.

Prithvi Shaw’s resurgence after getting dropped mid-way through the Border-Gavaskar Trophy has been so good that even the Indian team in England wants him to join them as a replacement for Shubman Gill. Shaw reportedly showed no interest in the offer and wants to focus on his white-ball game.

Ergo, the upcoming series is important not only for him to stake his claim for a spot in the T20 World Cup squad, but also to vindicate his call to stay back in Sri Lanka. The first ODI will kick off on July 18 in Colombo.

[Watch] IPL 2021: RCB shares throwback of Harshal Patel’s journey with the side