Team India off-spinner Ravichandran Ashwin has shared a video on his official YouTube channel in which a ‘fan’ at Trent Bridge is heard telling the cricketer ‘see you at the Gabba.’ Ashwin is not part of the playing XI for the first Test against England.

In the four-second clip, Ashwin is seen walking near the boundary along with a few other members of the Indian team. As he passes by, the Gabba remark can be heard. Ashwin acknowledges the comment with a small wave of the hand towards the person. Sharing the video on his YouTube channel, Ashwin wrote:

“’See you at the Gabba’ Fans at Trent Bridge.” 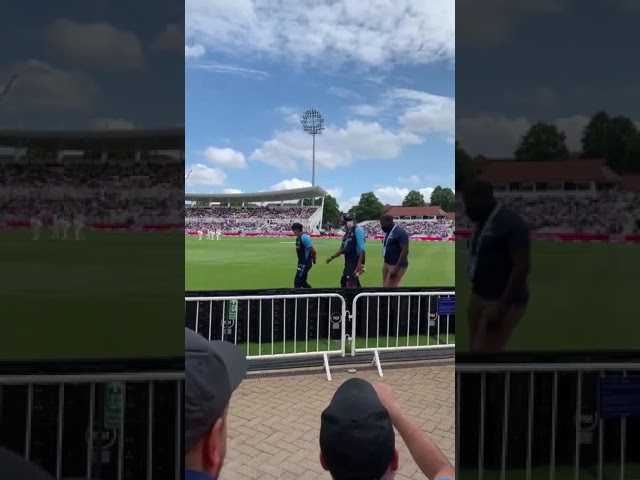 In the third Test at the Sydney Cricket Ground, Australian skipper Tim Paine was involved in a verbal exchange with Ashwin during the Indian cricketer’s match-saving partnership with Hanuma Vihari. A frustrated Paine made the remark ’see you at the Gabba’ to try and unsettle Ashwin (Gabba was to host the next Test).

The Indian spinner, batting with a sore back, gave it back to Paine and told the Australian skipper:

“I can’t wait for you to come to India, that will be your last series.”

Going into the Gabba Test earlier this year, Australia hadn’t lost a Test match since 1988. However, India triumphed in the contest by three wickets and Paine’s ‘see you at the Gabba’ jibe at Ashwin turned into a viral meme, with the Aussie skipper being brutally trolled.

Former England fast bowler Steve Harmison had earlier expressed surprise at India’s decision to leave Ravichandran Ashwin out of the first Test. According to Harmison, India could beat themselves by not picking the right side. He told ESPNCricinfo:

“I’m surprised; I’m very surprised. I think the England cricket team might be having a little smile in that dressing room and thinking ‘we’re happy with Ashwin not playing.’ He got runs with the bat; he was unbelievable with the ball in India. Ashwin has got a ridiculous number of wickets in English conditions. He played County cricket, got six wickets against Surrey not long ago.”

India picked left-arm spinner Ravindra Jadeja ahead of Ravichandran Ashwin in their playing XI for the Nottingham Test. The visitors were 125 for 4 in response to England’s 183 when play was called off on Day 2 due to rain.