On this day in 2020, Mahendra Singh Dhoni announced his retirement from international cricket, a year after he had played his last game for India. Following India’s loss in the 2019 World Cup semi-final to New Zealand, in which Dhoni contributed a hard-fought 50, the former captain went on a ‘break’.

Ending constant speculation over his future, Dhoni chose Independence Day last year to announce his decision to retire from international cricket. The former captain took to his Instagram account and wrote:

“Thanks a lot for ur love and support throughout. From 1929 hrs consider me as Retired.”

The message was shared with a video that encapsulated Dhoni’s journey in international cricket.

While Dhoni was renowned as captain cool in international cricket, he did have his share of controversies. We look back at three of the most prominent ones.

Despite having three top ODI players in Sachin Tendulkar, Virender Sehwag and Gautam Gambhir, captain Dhoni decided that they would not play together and would be rotated during the 2012 CB series in Australia. The move proved to be a major disaster as India won just three of the eight matches and failed to qualify for the best-of-three finals.

After a defeat against Australia during the series, Dhoni had stated that the three senior openers were not being picked together because “they are slow and could be costing the side at least 20 runs.”

Sehwag, however, took a dig at Dhoni and retorted during a media interaction:

“I did not know what he (Dhoni) said and what’s going on in media. He told us he wanted to give chance to youngsters who had come here and play the next World Cup. That’s what he told us.” 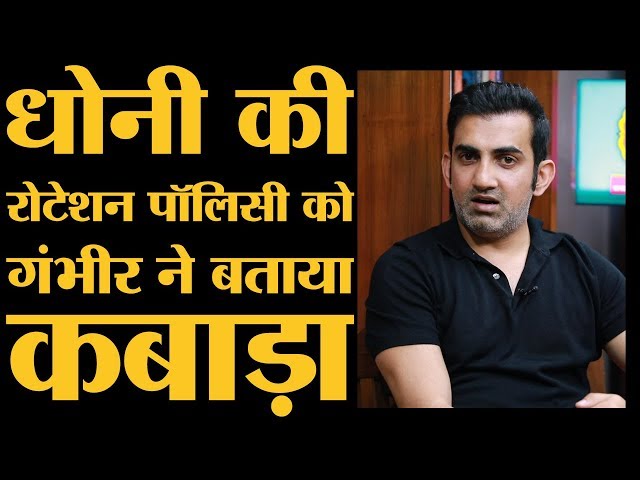 In 2019, Gambhir slammed Dhoni over the rotation policy. During the tri-series, Gambhir scored 91 and 92 in consecutive matches and was still made to sit out of the next game. In an interview with Lallantop, Gambhir said about Dhoni’s rotation policy:

“As far as the rotation policy goes, it was absolute crap and I’ve always maintained it. I have always believed that players are supposed to follow their captain’s decision but if you ask me, it was complete crap. If he believed in the rotation policy so much, then he should have stuck to it. He started with the rotation policy but played all the three in the must-win games. If you make a decision, then back it.”

In hindsight, it was a needless controversy that could have been avoided with better coordination among team members.

After India’s exit from the 2016 T20 World Cup, Dhoni was asked the obvious question about his international future by an Australian scribe. Rather uncharacteristically, Dhoni appeared to lose his cool and ‘invited’ the journalist to sit next to him. The interaction that followed was as below:

Dhoni: You want me to retire?

Dhoni: I was hoping it was an Indian media guy, because I can’t really say if you have a brother or a son who can play for India or is a wicketkeeper. But do you think I am unfit?

Dhoni: How is my running?

Dhoni: You think I can survive until the 2019 World Cup?

Dhoni: Then you’ve answered the question.

As the journalist walked back, Dhoni told him that he had ‘fired the wrong ammunition at the wrong time’.

Sharing his views on the controversy, the journalist Samuel Ferris wrote in a column for cricket.com.au that he had asked a pretty standard question and there was no reason for Dhoni to get ruffled. His column read:

“I thought it was a pretty standard question to be fair. When Dhoni shocked the world with his Test retirement out of nowhere after the 2014 Boxing Day Test at the MCG, it caught everybody off-guard. With that in mind, I was sure he would get asked again if he was going to retire from limited-overs cricket.”

“Word has it Dhoni hates that question and was ready to pounce on an Indian journalist who was going to ask it. Even though I fired the wrong ammunition, it seems I took a bullet for my Indian colleagues,” Ferris concluded in his column.

While some felt Dhoni was just having some fun, his conduct was questioned by others.

MS Dhoni and debutant Bangladesh pacer Mustafizur Rahman were involved in an ugly collision during the first ODI of the India-Bangladesh series in Mirpur in June 2015.

The incident occurred during the 25th over of India’s innings as they were chasing 308. Dhoni took off for a single after placing the ball towards mid-off. Left-armer Mustafizur, who was bowing from over the wicket, seemed to have glanced at the batsman and moved towards the path on which Dhoni was running. As a result, Dhoni ended up running into Mustafizur.

The Indian captain appeared to shove the bowler out of the way with his forearm. Mustafizur left the field for treatment. He, however, returned to claim a five-for and bowled Bangladesh to victory by 79 runs.

Post the game, Dhoni was fined 75% of his match fee and Mustafizur 50%. Incidentally, a similar incident occurred earlier when Rohit Sharma and Mustafizur collided, and Rohit was seen pointing his finger at the bowler.

“In the hearing, Dhoni defended the charge on the basis that the bowler was on the wrong line and realising that he couldn’t avoid the collision, he used his hand and arm to push him away as he went through to ‘minimise the impact’. However, my assessment was that Dhoni deliberately pushed and shouldered Mustafizur, which was inappropriate.”

It was a forgettable series for Dhoni as India went on to lose the three-match series 1-2 – their first series loss to Bangladesh.