Capitals bowlers managed to restrict a Royals side sans Shimron Hetmeyer to a below par 160 in the first innings.

It was the Australian duo of Mitchell Marsh (89) and David Warner (52*) that put 144 runs for the third wicket as the Capitals chased the moderate target in 18.1 overs.

Marsh failed to hit his maiden IPL hundred as he fell to Yuzvendra Chahal in the 18th over. Pant had no time to show respect against the leg-spinner and charged down with two sixes to provide the finishing touches to his side.

Pant remained unbeaten on 13 off four balls and accomplished more than 4000 runs in overall T20 matches with 22 half-centuries and a couple of centuries.

The 24-year-old has scored 4004 runs in 154 matches since he played for Delhi Capitals (then Daredevils) against Gujarat Titans in IPL 2016.

Pant has 2792 IPL runs to his name and 683 runs in T20 Internationals for the Indian cricket team. The remaining 525 runs have come for Delhi state team and North Zone in the Syed Mushtaq Ali T20 domestic tournaments (including zonal competitions). 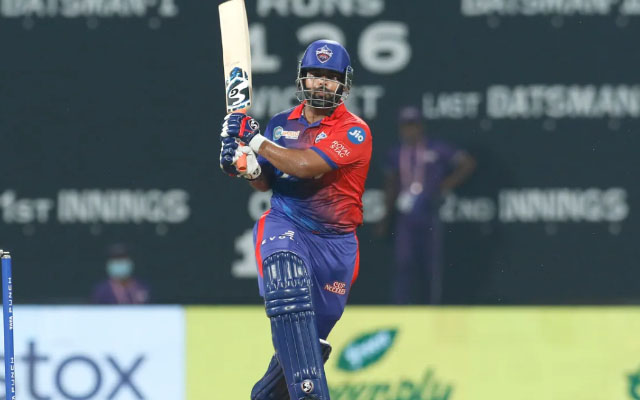 Pant was the joint-highest run-getter in Delhi’s triumphant Syed Mushtaq Ali Trophy 2017/18 campaign. The southpaw amassed 411 runs in 10 innings with a staggering strike rate of 195.71.

Pant scored the same amount of runs as that of Baroda batter Kedar Devdhar. He also hit a scintillating unbeaten 116 against Himachal Pradesh.

Pant brought up his maiden T20 hundred in just 32 balls as Delhi cruised to a 10-wicket win with 50 balls to spare while chasing 145.

Pant’s best season in IPL with the bat was the year 2018 when he scored 684 runs in 14 matches. He also scored his only IPL hundred (128*) against Sunrisers Hyderabad.

Pant ended as the second-most run-scorer in that edition after SRH skipper Kane Williamson (735 runs in 17 games).

IPL 2022: I Didn’t Comprehend The Batting Lineup At All – Aakash Chopra On Rajasthan Royals’ Defeat Against Delhi Capitals