Mumbai Indians won the match by 5 wickets against Rajasthan Royals to register their first win in the Indian Premier League (IPL) 2022.

Batting first, RR opening duo of Jos Buttler and Devdutt Padikkal added 26 runs off 27 balls before the latter was dismissed for 15 by spinner Hrithik Shokeen on the second ball of the 5th over.

A small 28 runs partnership off 18 was built between Buttler and Sanju Samson before the latter was dismissed for 16 by debutant Kumar Kartikeya. At the end of the 10 overs, Rajasthan Royals were at 73/2.

Jos Buttler, who was batting very slow, decided to accelerate his innings in the 16th over, which was bowled by spin bowler Hrithik Shokeen.

Buttler smashed sixes on the first ball and second ball to complete his half-century off 48 balls, including, 5 fours and 2 sixes. He didn’t stop there as he smashed two back-to-back sixes on the next two deliveries as well before getting dismissed on the last ball of the over. Buttler’s innings ended at 67 runs off 52 balls, including 5 fours and 4 sixes.

In the end, after the failure of the middle-order, Ravichandran Ashwin played an incredible 21 runs cameo off 9 balls, including 3 fours and one six to help Rajasthan Royals post 158/6 on the board. 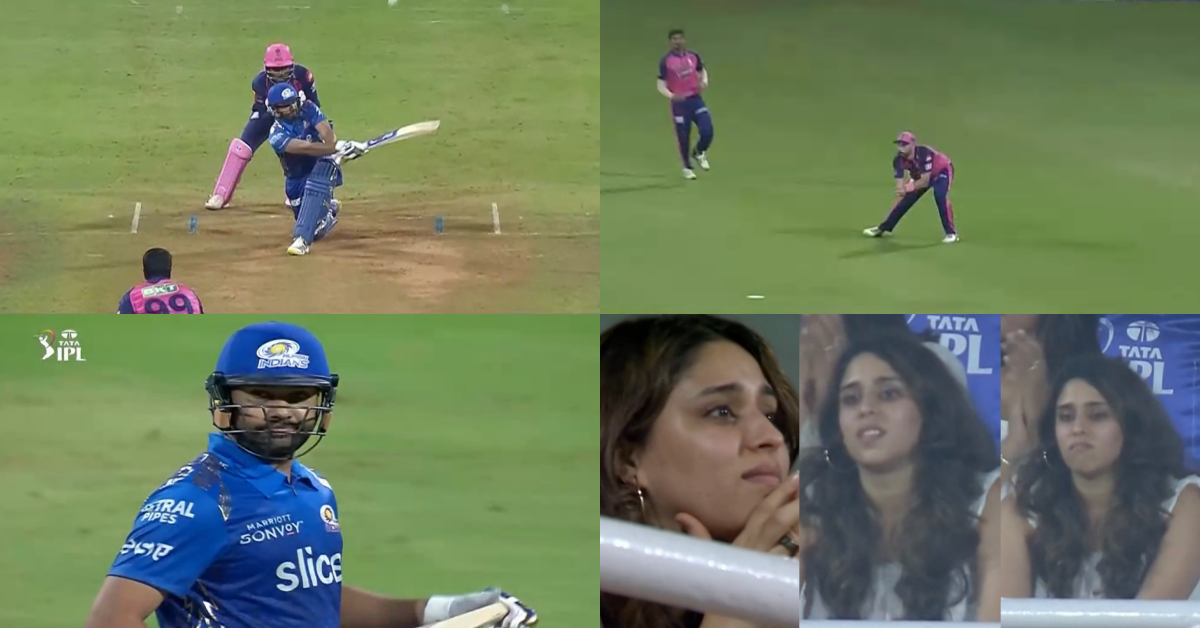 Chasing the target, MI skipper Rohit Sharma got out for 2 in the 3rd over, which was bowled by Ravichandran Ashwin. Wicketkeeper-batsman Ishan Kishan, who has struggled for runs in the Indian Premier League 2022, got out in the 6th over for 26 runs off 18 balls, which was bowled by Trent Boult and at the end of the powerplay, Mumbai Indians were at 41/2.

Meanwhile, the middle-order batsman Suryakumar Yadav completed his half-century off 36 balls in the 14th over, which was bowled by Ravichandran Ashwin.

In the end, Tim David played a good knock and Daniel Sams finished off in style by smashing a six to help Mumbai Indians finally bag a win in the 15th edition of the Indian Premier League.

#MI off the mark finally ✅ A good birthday gift to their captain. Hopefully we will see some more wins under their belt #TataIPL

What better gift could @mipaltan give to Rohit Sharma on his birthday than this win over a talent house like Rajasthan Royals. #RRvsMi #TATAIPL pic.twitter.com/8YsXZCiKNm

Relief and must say pleased for @mipaltan Imp for what has happened to them this season. Should get better. Tim David can be the finisher they need. Should play all games.

Grt victory guys! We have tasted the victory a bit late in this season, but that won’t take away how good a team we are. Well batted #IshanKishan #TilakVarma #SuryakumarYadav some quick fire knock by #TimDavid & tht winning six frm #DanielSams 👏👏 #RRvMI #IPL2022 #MumbaiIndians

Finally on the mark #MumbaiIndians

Looked that happiness of Rohit Sharma’s wife and daughter when Mumbai Indians won the match. pic.twitter.com/znUQh77z75

The wounds of the last eight games converted a pretty reasonable chase into a slightly jittery one for #MI. With the monkey off the back, I won’t be surprised if we see more powerful performances in the remaining games.

Mumbai Indians ends their 8 match losing streak in IPL 2022 on Rohit Sharma’s birthday. A perfect gift for the captain.

MI didn’t win on Sachin’s birthday, but made necessary changes to win anyhow on Rohit’s birthday. They thought we won’t notice. 💔

It just didn’t feel right that Mumbai Indians didn’t have any points in #IPL2022 so far.

Maharashtra government has announced 2 lakh cash price to all Mumbai Indians players on their win. #IPL

So Mumbai put their best player and best number 3 back to 3 and put a proven finisher into the finishing slot and batting actually clicks?! Wow. This IPL has been full of shocks and surprises

Mumbai Indians finally winning a match. Hope you all enjoyed this phase, it ain’t coming soon..

Looked that happiness of Rohit Sharma’s wife and daughter when Mumbai Indians won the match. pic.twitter.com/znUQh77z75

Poetic justice that Tim David plays a big hand in #MumbaiIndians winning their first game of #IPL2022 after being unfairly dumped early in the season.#RRvsMI #IPL2022

Still trying to understand the logic behind bowling Daryl Mitchell the 7th over. Trent Boult didn’t finish his quota of 4 overs.

Also Read: RR vs MI: Watch – Ritika Sajdeh Gets Dejected After Husband Rohit Sharma Gets Dismissed For 2 On His Birthday vs RR

RR vs MI: Watch – Ritika Sajdeh Gets Dejected After Husband Rohit Sharma Gets Dismissed For 2 On His Birthday vs RR