Electricity is certainly one of the necessities for living in the modern day world as our lives are now completely dependent on the devices that work on electricity, such as computer, microwave, television, fans, coolers, air conditioners, etc. However, what some people don’t like is the fact that they have to pay the bill for the electricity that they use and sometimes they resort to theft of electricity for saving money.

Electricity is stolen by joining a cable to the power source and this is happening in India despite the fact that everyone knows it is a crime for which they can either be sentenced to jail or get heavily fined. Though the electricity officials carry out surprise raids in different areas on various occasions and many people get caught and punished as well, people still don’t learn from such instances and keep on stealing electricity until they themselves get caught and face the consequences. 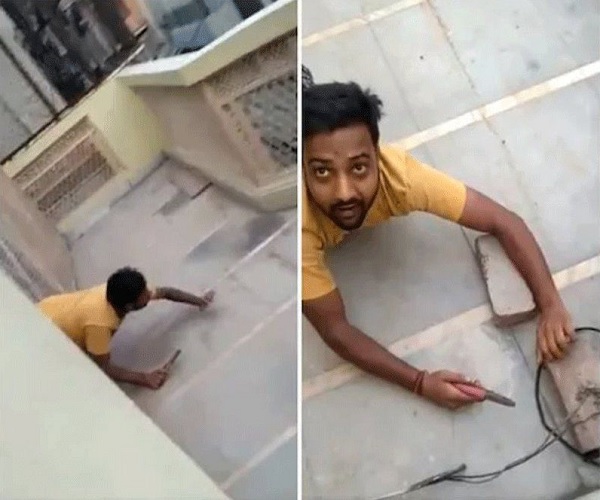 A video is going viral on the Internet and social media sites in which a person is seen crawling in his balcony as he is moving towards the cable which he has joined with a power source in an illegal manner. This incident reportedly took place in the city of Ghaziabad, Uttar Pradesh, and the video was shot by an electricity official who was standing on the neighbour’s terrace when the concerned person came crawling.

The man was not aware of the fact that he was being shot while he was trying to eliminate the evidence of the theft. In the video, the electricity official is heard telling the person that he is standing right over there.

Check out the video:

Hilarious: when anti-power theft squad arrived, a man crawled stealthily in his balcony to snap wire he had connected to steal electricity from power source, only to be caught out on camera !! Bijli Chor ka fuse udh gaya !! #Ghaziabad #Muradnagar #UttarPradesh @ndtvindia @ndtv pic.twitter.com/bGCLJPJWUE

Soon reactions started pouring in and people satirically praised for man for being talented to do illegal stuffs like this and then making attempts to remove the evidences. Here are some selected tweets:

We request our readers not to indulge in such activities!