The Sri Lankan cricket team have begun their practice sessions ahead of the limited-overs series against India. The India-Sri Lanka series will get underway on July 18 with the first ODI in Colombo. The series was earlier scheduled to begin on July 13 but had to be postponed as a safety measure after COVID-19 cases hit the Sri Lankan camp.

With all of the Sri Lankan players testing negative for COVID-19 as per their latest reports, the cricketers from the home team have come out of isolation. On Wednesday, the official YouTube channel of Sri Lanka Cricket (SLC) posted a video of the players practicing in the nets ahead of the India series. 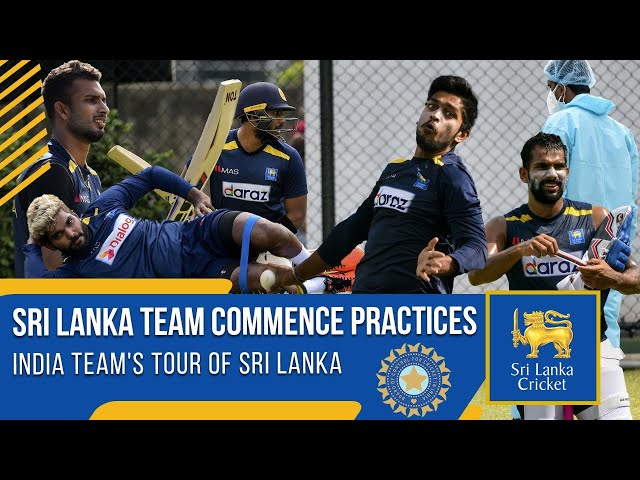 Some members of the team were even seen wearing protective gear during the training session as a precautionary measure. Sri Lankan players were seen working on their batting and bowling skills in the nets.

The Indian cricketers, led by Shikhar Dhawan, have also been practicing in Sri Lanka. Luckily, the Indian camp has been safe from COVID-19 cases so far.

On Tuesday, Sri Lanka Cricket (SLC) announced the names of the match officials who will be part of the white-ball series between India and Sri Lanka. The highly experienced Ranjan Madugalle has been appointed as the match referee for the upcoming series. The list of umpires includes Kumar Dharmasena, who is part of the ICC Elite Panel.

Ruchira Palliyaguruge, Raveendra Wimalasiri, Lyndon Hannibal and Prageeth Rambukwella are the other four umpires who will officiate in the India-Sri Lanka series. All of them are part of the ICC international panel.

Earlier, SLC also informed of the timings of the India-Sri Lanka series. While the ODIs will start at 3:00 PM local time, the T20I games will begin at 8:00 PM local time. All six matches of the series will be held at the R. Premadasa Stadium in Colombo.

In the wake of the COVID-19 crisis, SLC rescheduled the dates for the India-Sri Lanka series in consultation with the Board of Control for Cricket in India (BCCI). The three ODIs will now be played from July 18 to July 23 and the T20Is from July 25 to July 29.