Days after the arguably series-defining duel between Jasprit Bumrah and James Anderson, the Indian pacer has revealed his side of the story. Bumrah remarked that the words exchanged after the third day’s play in the Lord’s Test had ‘rilled’ him up to unprecedented levels, even motivating him to give it back ‘ten times’.

In an interview with Dinesh Karthik for Sky Sports, which was released on Saturday, Jasprit Bumrah said his bouncer barrage against Anderson wasn’t malised with the intention to ‘hurt’. He added that still, the veteran pacer’s ‘unpleasent’ words after the day’s play galvanized the whole team and made them eager to fight.

“I don’t want to go into the details. But when we play the sport, it’s never our intention to really hurt the batsman or try to aim to hit the batsman. It was a tactic to get the lower order out because when we go to Australia or South Africa, this is what happens. That’s what was to it. But as soon as the day got over, some words were exchanged which were not really pleasant so we were not happy about it. I did not hear at that time because I was really tired (chuckles) but all my teammates heard and usually I am a person who doesn’t go looking for a fight or get riled up when needled. But when I heard what was said, I got really riled up.”

“Then it was like, if something comes up [ahead in the game] I won’t really back down and give it back ten times. Everyone was really charged up and ready for a fight, to go really hard but [also keeping in mind] to not lose shape and remember that we are here to do a job, not just talk and make an impact. We wanted to use the fire to our advantage and make a result out of it that eventually happened.”

The moment proved to be a match-turning one. England’s concentration dwindled the following day and India, on the backs of Mohammed Shami and Jasprit Bumrah’s batting partnership and Mohammed Siraj’s four-wicket haul, won the Test on the final day. Later, Indian skipper Virat Kohli also said it was the on-field incident that made India go all out for the famous victory.

“Batsmen can get away with a lot of things” – Jasprit Bumrah 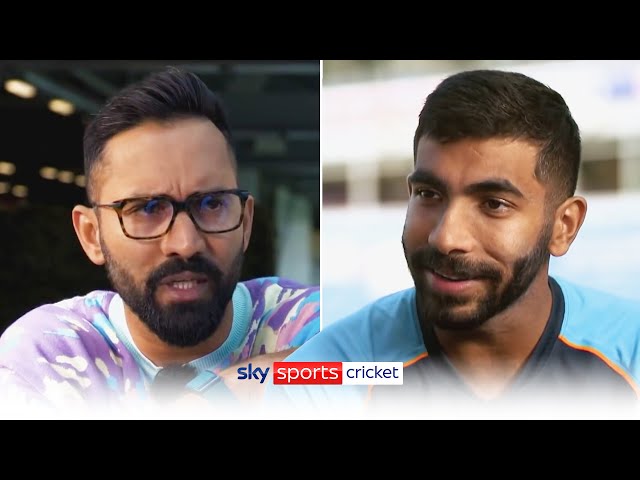 Further in the interview, Jasprit Bumrah went into a mini rant against how the sport is currently skewed in the favor of the batters. He said it’s the bowlers that always have a bigger impact on championship wins despite the batters being more popular.

He, however, added that it’s the extra hard work that fast-bowlers do that makes the job self-fulfilling and prompts people to remember them for a long time. Bumrah explained:

“It’s (fast-bowling’s) a full-year job, it’s not a thing where you turn up and perform it’s not easy. Batsmen can get away with a lot of things, they have a shoulder pain, a knee pain, (Karthik laughs), they have to stand in the slips and just clap… I am a bowler and also a fan of fast-bowling, so I’ll always pick up bowlers and highlight them!.”

“100% (Whether batsmen get more love in India), that’s not even up for debate! I feel bowlers do the hard job and if you have to win titles bowlers need to have a major role in it. Obviously batsmen play a role but I am a bit biased towards bowlers… Even in T20 cricket, the rules are in your guys’ favor, the boundaries are shorter, there’s no swing, no reverese swing. I don’t see any development coming in to make the ball swing or seam more (laughs). Coming against those hardships and making an impact, despite all these things, I feel that gives you a lot of self-belief.”

Jasprit Bumrah is currently playing in the fourth India-England Test at The Oval, having accounted for the wickets of both the English openers in the first innings.