Former Pakistan captain and selector Inzamam-ul-Haq criticized the Indian batters for not showing any intent to score on Day 1 of the third Test against England.

He pointed out how Rohit Sharma was well set before getting dismissed for nothing much to show against his name.

Sharma survived the initial burst from the England quicks and looked set after facing 105 balls. But he could not get going and finally fell to the pull shot once again with his score at 19.

Speaking on his YouTube channel The Match Winner, Inzamam-ul-Haq stated that players have to try and start looking for runs once they spend a reasonable amount of time at the crease.

“The Indian batters never put any pressure (on the bowlers). As a cricketer, whatever the nature of the pitch is, whether there is swing or spin, if you have played 25-30 balls, your eyes, your eye coordination, your hand coordination, all these get accustomed to the pitch. 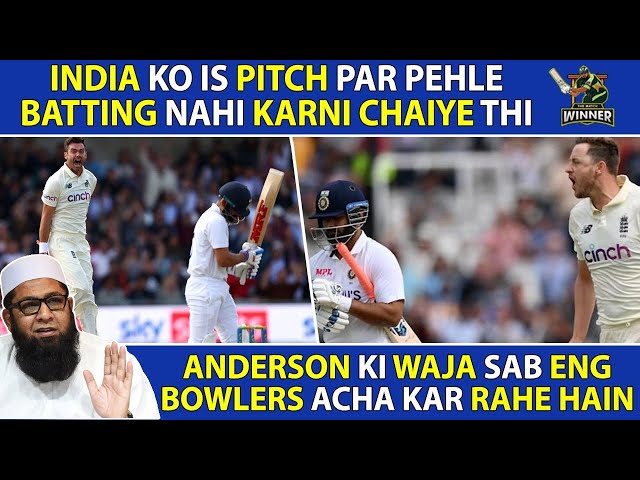 Inzamam was critical of Virat Kohli as well for digging himself into a hole before getting out cheaply.

“Virat Kohli too played 31 balls. But what did he do? He made 7 runs, and he was completely tied up,” Inzamam-ul-Haq added.

“If you have won the toss here, put them into bat again” – Inzamam-ul-Haq reckons England’s batters would have been under tremendous pressure

Inzamam-ul-Haq felt that Virat Kohli should have bowled first at Headingley after winning the toss. He believes the England batters would have been under tremendous pressure coming into the Test after a meltdown in the fourth innings at Lord’s last week.

“(England are) a team that you had defeated some days before. In the fourth innings, on a dry pitch, you made them absolutely flat. You destroyed their batting. If you have won the toss here, put them into bat again.”

The former Pakistan batter believes India would have been able to dismiss them cheaply had England been sent into bat.

“With the advantage of two hours (of moisture), I won’t say that England would have been all out for 78, but they wouldn’t have scored big,” Inzamam-ul-Haq added.

However, India batted first after winning the toss and were bundled out cheaply for 78, their third-lowest first-innings total ever in Test cricket.